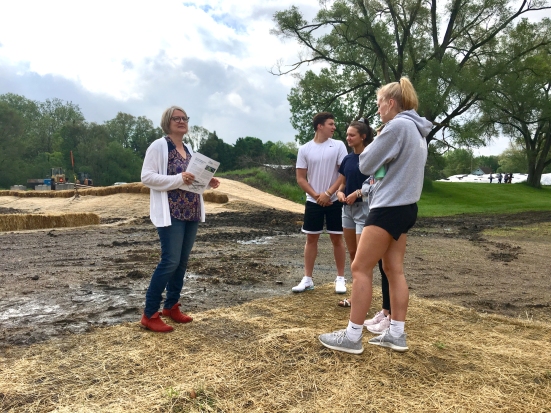 Jackie Koney, project manager for the Mill gives Schoolcraft students some background information about the history of paper making when the mill was going strong.

Peg Butler finishes some of the painting of the signs that have been posted on the fencing on the south end of the Mill property.

The poetry speaks with volume: Foot-high black lettering on bright orange silt-fencing, facing motorists on W Avenue on the south side of the Mill.

The six-week short course, Poetry and Music, took an interesting turn when the class visited the Mill in May to study its rebirth, renewal and regeneration. They learned about the use of poetic language from Martin, using words rich in meaning and connected to the mill renovation project.

There were 22 students in the elective class who wrote poems in as few words as possible while being able and willing to revise the wording the teams created. They were urged to look at poetic devices through music terms, according to Martin.

“I understand better what words mean to different things,” said Chance Evens, one of the students. “I will think more about words when reading and listening to music in the future.”

Butler’s idea for the Mill Writes Project grew out of a previous public art project called Orange Lining that she helped create along a seven-mile light-rail line in Portland.

On field trip day to the Mill, students learned about the past, present and future of the Mill site. Lisa Phillips, an environmental scientist, talked about the contamination that remains from the industrial processes and the techniques being used to clean up the site. Jackie Koney talked about the redevelopment of the Mill site to be a thriving complex of businesses and activities that will include a brewery, event center, hotel, walking trails and wildlife habitat.

Students collected words, ideas and images during the Mill visit, and over the course of a week honed their thoughts into short poems. Twenty-eight poems were then painted onto silt fencing, some signs stretching as long as a hundred feet. They will be installed along the south fence at the Mill on a rotating basis. For the weekend of the Old Car Festival in Vicksburg, all of the poems that were not yet installed at the Mill were displayed inside the vacant pharmacy building in the Village to create an engaging spectacle, activate the pharmacy space and inform about the Mill Writes Project.