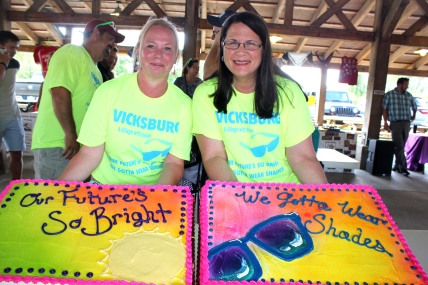 Jennie Holmes and Michelle Morgan show off the celebration cake that the village of Vicksburg served to visitors at its July 15 village council meeting.

The village rolled out the police cars, fire trucks, and the sheriff brought emergency vehicles. Clara Stafinski was treated to a lesson on how to operate the firehose on a warm summer day.

“It’s a rare thing to see a village reduce its millage rate,” said State Senator Sean McCann. He was among the politicians invited to the village council meeting on July 15 to a “Celebration of Community. The special event sponsored by the village was keynoted as “Our Future’s So Bright We Gotta Wear Shades.”

Two of the politicians present were presented with a special resolution for the help they provided the village five years ago after the state put it on notice for deficiencies in its financial practices. Former State Senator Margaret O’Brien and County Treasurer Mary Balkema received thanks from Village President Bill Adams and Manager Jim Mallery for their assistance in correcting the deficiencies.

“Thanks for your leadership,” replied Balkema after the resolution was read. “I was pulling back the sheet and there was a dead horse under there. Now you have wow service, tax base growth, clean audits, a healthy fund balance and no foreclosures in the village this year. Plus, you have the largest investment the county has ever made in the Mill when it was part of the country treasurer’s responsibilities. You now have a strong tax base and transparency.”

O’Brien remembered meeting with the Department of Treasury when it looked like the village was on the brink of needing an emergency manager from the state. She pointed at the village trustees seated in back of her, saying it wasn’t easy to run for office in those days and now you have to be a part of one of the most successful turnaround stories in the state. Dissolution of the village might even have been an option, she said.

Mallery’s opening statement was about the crossroads the village has reached. He named “Historic Boulevard” and “Potential Avenue as special street signs. “Our goal is to be the model municipality our size in America. We have three core values that are the blocks of our foundation: Deliver WOW Service; disciplined to being fiscally responsible with the people’s money; complete and full transparency for all to see.”

Mallery announced the hiring of Alex Lee as a communications specialist, saying “He serves people and that’s what we are about in the village.” Adams then closed the meeting with an announcement that Mallery’s contract as village manager had been extended for another five years, at an annual salary of $76,500 from July 2019 to 2024.