Tiffany Bouvrette and Dave Benedict bested Scott “Stubby Haynes” and Jim Curtis in the final horseshoe pitching contest at the Lions Club B&B. Tiffany is the first female winner of the tournament in its 13 years and it was the first time winning for both she and her partner. 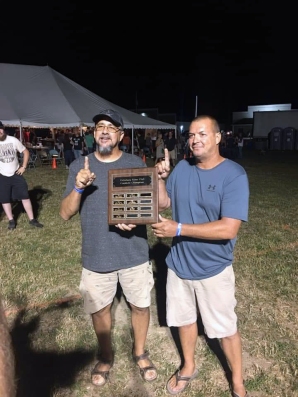 The Vicksburg Lions Club had 110 participants, the largest field yet, for the 9th annual cornhole tournament Friday night July 26. The tournament lasted nearly 6.5 hours. Steve Heath and John Ringler are the 2019 champions.

She’s called the “Champ” by her friends since winning the Lions Club B & B horseshoe pitching contest on the last Saturday in July.

“Not many women throw around here, so I’m used to competing against men,” said Tiffany Bouvrette, better known now as the Champ. The contest lasted nine and a half hours before she and her partner, David Benedict, were declared the winners having crushed the competition winning six games out of seven for the day.

The horseshoe tournament also drew the largest group yet, according to Brett Grossman, chair of the contest. “Eighty-six pitchers threw in an epic battle but at the end Tiffany Bouvrette and Dave Benedict bested Scott ‘Stubby’ Haynes and Jim Curtis in the final. Tiffany is the first female winner of the tournament in its 13 years and it was the first time winning for both her and her partner,” Grossman said.

The team were paired in a random draw. Benedict told Bouvrette that he only played once a year at the B & B and apologized to her for drawing him as a partner. What he didn’t mention is that he had experience as a baseball pitcher and was known as a pretty good athlete growing up in Vicksburg. “He got better as the day went on,” Bouvrette said.

She herself has lots of experience pitching horseshoes, growing up in the Bruce and Diana (Kott) Sehy family. Her dad has been tutoring her since the age of 10, she pointed out. Together they pitch every Monday night as a doubles team on clay pits in Kalamazoo that most professionals use. She has been entering tournaments for the last four years as well.

In August, Bouvrette took first place in her class at the National Horseshoe League tournament in Jackson, competing with men and throwing from the 40-foot range. Women usually compete in the 30-foot distance which found her in third place at the same competition.

“I really get my competitiveness from my mom who is super competitive,” she said. Some of that might also come from her grandfather, Jerry Kott who was a well-known insurance agent in these parts, she acknowledged. Naturally, her work experience is in the insurance field having worked in employee benefits for 19 years. She has been staying home with her kids this summer who are 10 and 7. They attend Indian Lake Elementary school.

The Lions Club cornhole tournament had 110 participants, the largest field yet, for the 9th annual competition on Friday night. The tournament lasted nearly 6.5 hours with Steve Heath and John Ringler the new champions.