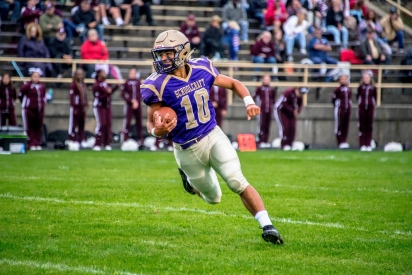 Kobe Clark runs the ball back on a kickoff. Photo by Stephanie Blentlinger, Lingering Memories Photography.

Kobe Clark, senior running back for Schoolcraft High School’s championship football season, is being touted as one of the top 10 players in the state of Michigan by MLive.

Clark has set all kinds of Schoolcraft records and even a statewide record for the most touchdowns in a game. In the round one game for the District championship, Schoolcraft beat Hartford 57-6, with Clark touching the ball only five times for 198 yards rushing and four TD’s and a reception that went for 50 yards after the catch to the Hartford end-zone. He also plays two-ways as cornerback on defense.

The son of Benny Clark Jr., former Western Michigan University running back and Ravenna High School state champion, Kobe grew up hearing stories of his father’s football glory, including the time he set a state record with 49 carries in a championship game or how he was the first player in state history to eclipse 7,000 rushing yards in his career, according to MLive.

The Clark name has been heard for quite a few years over the loudspeakers at Roy Davis field, beginning with Benny (boom boom) Clark III, then two-time Kalamazoo player of the year Ricky Clark. Now, the youngest Clark, Kobe, is making his mark in the record books.

“I love what [my brothers] have done, so I have a high expectation for myself and want to achieve what they achieved. But some things they haven’t, because they worked to make me such a better football player,” Kobe said. “I became tougher, more elusive, faster because they were older than me, and they used to throw me around. But it got me better.” (From MLive)

In 2018, Clark put his name at the top of the state record books for touchdowns scored in a single game (9), against arch rival Constantine. At 5-foot-10 and 175 pounds, he is indeed quick and elusive. So far in 2019, Clark has 119 carries for 1,419 yards, with 35 touchdowns from his running back position. He is also a great receiver, with 22 receptions for 393 yards and 6 touchdowns. On defense, he has 37 tackles, 25 solo and 8 tackles for loss with 1 sack and 2 interceptions, with one returned for a 21-yard score.

In his second year as head coach, Nathan Ferency said, “Kobe is such a hard worker on the field and in the classroom.” He also was very complimentary of Clark’s character. “When it comes to the success Kobe is having, he is very humble about it. He believes it’s all about the team.” Clark showed his leadership when the Eagles lost in the last regular season game to Kalamazoo United, 35-27. Clark told his team in the post-game huddle, “We’re not losing again.”

After the game against Hartford, Coach Ferency told the team, “Great win team! Ok now it’s time to get to work and get ready for the next one.” When he finished, Clark said to his team, “Four more to go guys, lets finish it! Four more.”