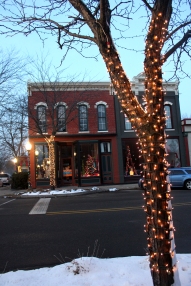 Downtown Vicksburg store fronts add to the festivities during the holidays with their beautiful décor. Natasha Hanichen and her legion of helpers have again created a fantasyland.

The Vicksburg Department of Public Works won first prize in the 2018 parade for their creative float. It epitomizes the work this crew does in the winter months in the village to keep the streets plowed.

This float was the entry from Paper City in the nighttime parade.

There will be lots of children’s activities during Christmas in the Village. Games at the Community Center, entertainment in Oswalt Park, open houses at various stores, trains at the Historic Village and tours at the fire station at the corner of S. Main and Washington Streets. 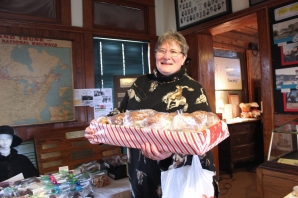 Donna Weinberg arrives at the Vicksburg Depot Museum with a tray full of her homemade bread for the Historical Society to sell at their annual bake sale fundraiser.

Activities at the Historic Village on S. Richardson Street include the model trains run by Joe Timko and his sidekicks Rick Davison, Phil Timko, Travis Robertson and Justin Plankenhorn.

The village of Vicksburg will turn into a wonderland of Christmas lights at 5:30 p.m. Saturday, December 14 for the fifth annual night-time parade through downtown.

Former village manager Ken Schippers hatched the idea of a glow-in-the-dark parade five years ago. It has since attracted huge throngs of visitors to the village. The Downtown Development Authority has been the sponsoring organization for Christmas in the Village since Schippers moved it to the evening parade.

But the parade is just the culmination of holiday activities throughout the day. For those who love homemade baked goods, the Vicksburg Historical Society starts things off with its annual bake sale at the Historic Village’s Depot Museum from 9 a.m. to 1 p.m. While customers are munching on cookies and cupcakes, they’re invited to bring the kids to see the O-gauge toy trains running the rails in the old yellow Township Hall on the grounds nearby. It’s a taste of nostalgia for the days when kids were gifted with Lionel train sets under the tree and their fathers could play all day with the setup of rail cars, engines and a caboose and a switch or two.

Events move downtown at 2 p.m. with the 6th annual winter market in the former Hill’s Pharmacy building. There won’t be a whole lot of produce for sale but there will be honey, baked goods, beefalo, Christmas décor and gifts. Another type of craft market will be open at 103 E. Prairie Street for those looking for other kinds of homemade items for sale.

Meanwhile kids, parents, friends and relatives alike will be entertained on the live stage adjacent to Oswalt Park at Prairie and Main. There will be music with the high school choir singing and also strolling the streets while caroling. Dancers from the community education dance classes will perform along with a magician and a story teller holding forth in a heated tent.

The Children’s Elf Workshop, run by staff of the Vicksburg District Library, will invite children to play games in the main room of the Community Center.

The Big Red Machine will kick off the parade at 5:30 p.m. as it moves north from the school’s administration building on Kalamazoo Avenue, west on East Prairie Street to S. Main and thence south to Park Street.

There will be three special visitors this year at Christmas in the Village: Santa Claus will be downtown at the old consignment store before and after the parade. Santa Paws – dog visits – will be at Cuts 4 Mutts grooming, 207 Richardson, during the event, and the Grinch will be at the Troll Marketplace on W. Highway Street. Draft horses hitched to wagons will transport visitors from downtown to the Troll and around the village, then back downtown. The Holly Jolly Trolley will travel in the other direction to take people to the Historic Village on Richardson Street and the nearby Cuts 4 Mutts. There will be horse and pony rides available on the grounds of the Historic Village all day.

The tree lighting ceremony will take place in Oswalt Park soon after the parade ends. Adults are invited to take part in part in the annual Pub Crawl at five of the local drinking establishments, sponsored by the Vicksburg Area Chamber of Commerce.

Lead sponsors for the celebration include Frederick Construction, The Mill at Paper City and the Village of Vicksburg. Others include Grossman Law, Fred’s Pharmacy, Imery’s Perlite, Main St. Pub and Michelle’s Restaurant.