Hidden way back in Vicksburg’s Industrial Park sits KEPCO, a manufacturing company, little known to residents of the area but well-known in the niche market of electropolishing.

It is owned by President Bill Hochstetler and general manager Paula Hochstetler, assisted by their two sons-in-law, Tim Palomaki (plant manager) and Nick Sertic (sales manager).  This trio of men is sometimes dwarfed by their well-known wives – Paula, Angela and Rita who own Apple Knockers restaurant in downtown Vicksburg.  Fortunately, that doesn’t seem to faze them when it comes to living in this small town and running their businesses.

“I love to hunt and fish, living close to the school, the workplace and the people here,” remarks Nick Sertic, although he was raised in Farmington, near Detroit.  He served as a sales rep for a medical supply company after graduation from Ferris State, where he met Rita.  Now as sales manager for KEPCO, he is all about electropolishing stainless steel, passivation of stainless steel parts and problem solving for their customers.  He claims there is, “No ceiling here for this small business.”

KEPCO (www.kepcoinc.com)was formed in 1983 and was known as Kalamazoo Electropolishing Company on Sprinkle Road, where Bill Hochstetler was the general manager until 1997, when he purchased the business.  He moved it to Vicksburg’s Industrial Park in November of 2004, Sertic joined the company on April 1 of 2005, where he shared an office with Paula who was the plant manager then.

What KEPCO invented for removing metal impurities with electropolishing was creative engineering according to Sertic.  KEPCO’s unique machinery to process multiple parts for acid dipping was the secret to the company’s success at the time.  They could do two million pieces a month with a device that automated the dipping process.  They could process up to 20,000 pieces an hour to provide quick turnaround time and better control to the end product, Sertic explains.

The company’s electropolishing process removes imperfections in metal from the surface called deburring, working only with stainless steel to protect the parts from rust and corrosion.  In 2005 they were 40 to 45 percent into automotive work and since then have diversified into medical parts, water purification desalination pumps, and agriculture.  “It’s not too complicated a process, as it’s based upon time, temperature and voltage.  The voltage and time is the most important thing we need to do to keep the metal impurities coming out,” he explains.  “We also do passivation with no electrical current, removing impurities which leaves a nice clean surface.  Lots of time, we become a problem solver.  You’ve got an issue, we try and fix it for you,” Sertic proclaims.

Since they use nitric and citric acids in the process, they are closely monitored by the EPA.  They have fashioned a waste treatment operation that recycles all acid and water, which is drained into the system and made into a cake like substance that is environmentally friendly.  It’s a very green thing, according to Sertic. 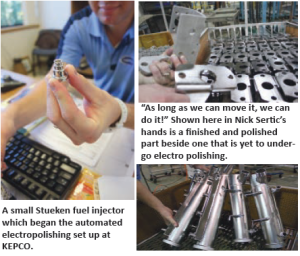 Working with family sometimes has its challenges, but this team seems to understand these and they make it work by also supporting the wives in the restaurant business.  Paula wears several hats in both entities and that is easy to understand when it becomes known that she holds an aviator’s license, started a pet store in Three Rivers and then a pet grooming operation, too.  She has bought and sold real estate and has been acknowledged as “the boss” for some time, Sertic proclaims.  He works closely with brother-in-law Tim, who came from the military (Coast Guard) often going out to plant locations as the “ghost busters” team to solve problems in on-site passivation.

“Bill is the most fair-minded person I know,” says Sertic.  “He treats people in a kind way so that many on our staff have been here almost as long as he has.  In addition, Tim and I are like brothers, he knows what I’m thinking and is a real straight shooter.  The good news is you know the family always has your back!”