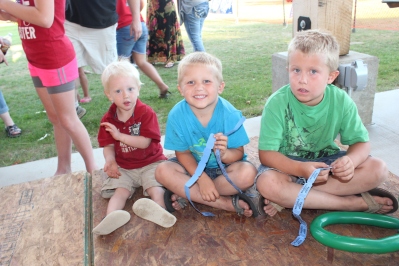 The horseshoe pitching contest gets intense as it winds down to the finals each year. The champions have bragging rights at the Hide-a-Way for a whole year.

Clowns, a magician, and kids’ games are the highlight of Thursday at the Summer Festival. 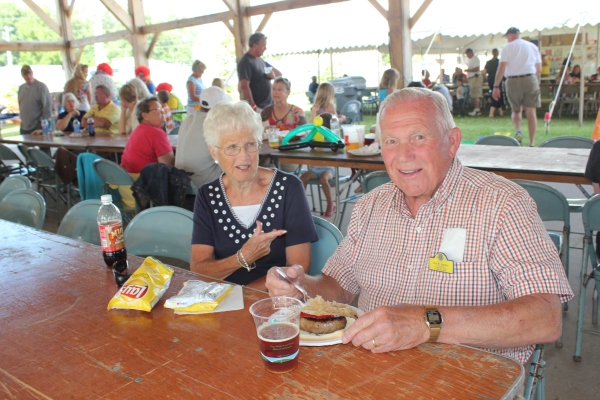 The Vicksburg Lions Club on July 23-25 will celebrate the 42nd anniversary of its Summer Festival, better known in these parts as Otto’s Beer & Bratwurst. This will be the second year in the new pavilion in the Historic Village setting on N. Richardson Street, just north of the downtown. The Lions Club helped to finance the building along with many other community individuals and groups.

The pavilion has provided a much more visible event than when it was held at the Recreation Park, according to Doug Stafinski, long-time chairman of the B&B. That visibility in turn has helped the club increase its profits, all of which have gone back into the community. Over the years, it has raised more than $545,000, he said.

The B&B was the brainchild of local baker and Lions Club member, Otto Kaak, who was from Germany originally. He and his wife Anna ended up plying their trade on Main Street in the village of Vicksburg during the 1970s. He suggested they use his secret recipe for sauerkraut and bratwurst and make the gathering open to the public in the old Helms garage. It turned out to be a rip-roaring success. The club guards his recipe like the original Coca-Cola recipe. The brats are now made in Fink’s deli store, but owner John Fink is likewise pledged to secrecy, according to Stafinski.

John Polasek and his able kitchen crew of members make the sauerkraut, and they don’t like to share that recipe either. The beer will also have a new twist to it, featuring Bell’s from the tap along with the usual Miller High Life, Miller Lite, and Leinenkugel Summer Shandy.

The Kids’ Night on Thursday kicks off the three-day event with a magician, games, and hot dogs for the little ones. Friday, the club opens its door at 11 a.m. for lunch, with the Vicksburg Rotary Club enjoying the Lions hospitality for its noon meeting.

The Vicksburg Farmers’ Market will move southward to the main part of the Historic Village for the one Friday, providing a different setting for vendors and customers.

The volleyball tournament has been canceled for this year in an attempt to protect newly seeded grass on the east side of the pavilion. The village Department of Public Works (DPW) carefully spread three to six inches of topsoil donated by Allen-Edwin home builders. The DPW planted the grass seed in April and with all the rain, has achieved a good catch of grass. But it’s not ready for prime time, Stafinski said.

Instead the adult cornhole tourney will be held on Friday from 6 p.m. to possibly midnight. The annual horseshoe tournament has been moved to the Richardson Street side of the property and kicks off at 11 a.m. after the Vicksburg High School alumni breakfast at 9 a.m.