Greg and Erin Erb might have changed zip code outside 49097 to start a restaurant, but Greg says he’s still a Vicksburg guy through and through. And co-owner Lisa (formerly Erb) recently married Vicksburg High School Principal Keevin O’Neill. So while this month’s feature establishment might be just into the Portage area, its owners still consider Vicksburg home. This July 3, Erbelli’s celebrated 20 years at its Portage location. I was able to meet with Greg Erb to learn more about this accomplishment.

Erb had worked in the food service industry during college and found comfort in Italian foods. After purchasing the Portage location, he needed a name for the new restaurant. After brainstorming with friends, Erb decided on the name Erbelli’s. Not only did it incorporate his name, it made him laugh.   A second location on Stadium Drive was launched in 2008. A third location in which Erb is a partner opened in Bradenton, Florida last year.

If you Google Erbelli’s on the web you’ll get “Voted Best Pizza in Kalamazoo and Portage”. You can travel, study and actively pursue great new menu items but sometimes the best ideas are hatched locally and by accident or experiment. For instance, former employee Chris Yeck is credited with creating “The Wrist” pizza that was voted Best Gourmet Pizza in Kalamazoo in 2005, 2006 and 2008. Beginning with a homemade Alfredo-based crust, this fan favorite is topped with marinated chicken breast, applewood smoked bacon, fresh mushrooms, fresh crumbled feta cheese, and mozzarella. If that’s not enough; it’s brushed with a delicious in-house whipped garlic butter when it’s finished.

Another award winner is the Disco Q Pizza with its Cajun crust and spicy wood-grilled smoked chicken grilled fresh in the parking lot. Not only are their menu items famous; Erb, a huge sports fan, is happy to say that Red Wing defenseman, Danny DeKeysor, worked at the Stadium Street location while attending Western Michigan University. Being so close to campus, you can regularly see WMU students, athletes and faculty at that location. 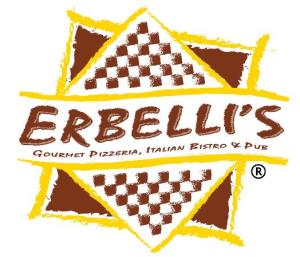 Greg was proud to tell me of his son Keenan’s successful academic experience in Vicksburg Schools as well as his success in athletics while there. That’s just one reason you saw him at local athletic events but not the only reason why you see Erbelli’s supporting the events. As a premium sponsor of Vicksburg athletics, you’ll see its name on the booster board and providing team meals before home football games. Unwilling to “toot his own horn” by elaborating on how Erbelli’s contributes to local youth programs (other than he loves to do it), I’m told his support is extensive and very much appreciated.

Erb has met his goal of creating a menu of food items that are “craveable”. While Wikipedia won’t verify that the word exists; I understand the concept. In my short time in Vicksburg, my husband and I have visited the Portage location on several occasions. After my initial visit, I have to say that subsequent visits have been spurred on by a craving. Last week it was pizza. With so many great options; pastas, subs, salads, wings, gourmet pizza and calzones, it’s a lot easier to go there with something in mind. The menu is very extensive. Not only did we find a tasty new pizza flavor combo with an order of Erbbie bread and a couple of cocktails; we were able to take advantage of both the daily food and drink specials and use the coupon I printed from their website. As usual, we also saw several Vicksburg locals while there and enjoyed some great live music provided by Kalamazoo performers Nashon Holloway and Bryan Blowers. You’ll find live entertainment at both Michigan locations on Thursday nights.

Erbelli’s offers a great dine-in experience as well as takeout, delivery and catering. Along with being the general manager for the Portage location, Lisa is the catering specialist. Whether it’s pizza, wings and Erbbie bread for a casual family or neighborhood gathering or a full meal for a wedding; give them a call for a very competitive price. Join me in wishing them congratulations on their successful 20-year history with many more years to come!