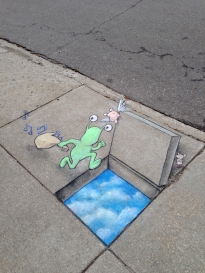 Chalk art by artist David Zinn will be a feature of the scavenger hunt, sponsored by the Vision Campaign. As for permanence, these drawings will not be Zinn’s usual chalk art, but rather small-scale painted images that will resist rain and be only gradually affected by sunshine and foot traffic. 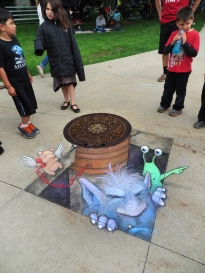 The Vicksburg Vision campaign has been in full gear for the last few months. To get more recognition and participation, the organizing committee is putting on a series of fundraisers that are fun, have high visibility and offer a challenge to the participants.

A scavenger hunt has been set for Saturday, April 16 with a featured guest, David Zinn from Ann Arbor, drawing permanent art installations at several secret locations. It is for the participants to find his artwork and hustle around the village to win the prize for the fastest completion of the scavenger hunt.

Of course it is all in fun, with the hopes that individuals and families will compete for the prizes while making a contribution to the Vision campaign. Each donation has an incentive as the Vicksburg Foundation has set aside $170,000 for matching whatever is raised by the community. The funds will go toward construction of the proposed walking and biking trail that will extend from the current 1.6 miles that runs parallel to Sprinkle Road. Bringing the trail into the heart of the village has been Kathleen Hoyle’s focus since she came on board as executive director of the Downtown Development Authority.
The scavenger hunt has been planned by Donna Cratsenburg-Scott, a volunteer who loves to put her many talents toward helping her adopted community. It will begin and end at the Vicksburg Cultural Arts Center, VCAC, 200 S. Main, with registration beginning at 9 a.m. and the starting gun going off at exactly 10 a.m. There are seven easily walkable and family friendly locations within the village on the hunt. There will be hints given out for each with an easily recognizable piece of art work by celebrated chalk artist David Zinn at the destination. His work is whimsical and so much fun, said Cratsenburg-Scott, that anyone in the community can enjoy it.

Music will be playing at the Art Center. A bake sale is also planned to keep up energy during the scavenger hunt, she said with a chuckle. All who compete will be entered for additional prize drawings. The event will go on rain or shine, as April weather can be finicky at times.

A suggested donation of $3 to $5 per person to participate in the hunt is all that’s needed to enter and win. Tickets can be pre-purchased at the VCAC or by contacting Cratsenburg-Scott by phone at 269-903-6514 or through email at doonaburg@gmail.com.