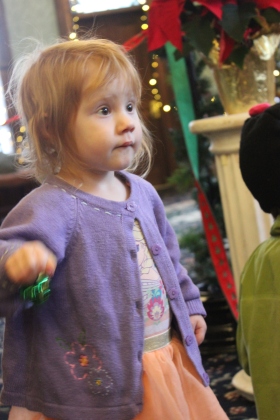 Children of all ages are in awe when attending Christmas events at the Community Center in 2016. 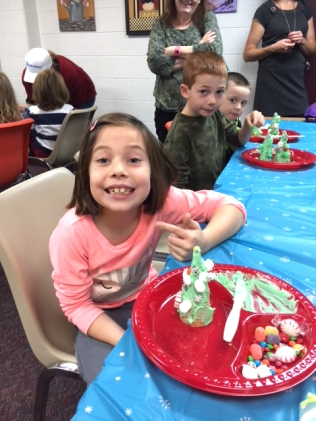 Erin Willoughby has a plate full of candy from the event first staged at the library in 2016.

The Vicksburg District Library will offer four opportunities for the public to capture some holiday cheer this December.

On Sunday, December 3, children will have the opportunity to decorate waffle cone Christmas trees at the third annual Candy Forest Decorating event from 2-3 p.m. Youth Services Librarian Stephanie Willoughby will provide waffle cones, green frosting, and a variety of candies and sprinkles. For additional entertainment, the library will show “How the Grinch Stole Christmas,” and “A Charlie Brown Christmas.” There is no cost to attend, but attendees must register on the library’s website or at the circulation desk. Children must be aged BK/Kindergarten through fifth grade. A parent or guardian must attend with them.

On Friday, December 15th from 1-4 p.m. the library will show “Holiday Inn” (1942). At a fantasy hotel, open only during the holidays, Bing Crosby and Fred Astaire play a dancer and a singer who compete for the attention of the lovely Marjorie Reynolds. The film includes Crosby’s hit song, “White Christmas.”

From 1-4 p.m. Saturday, December 16, children and adults are invited to view “A Muppet Christmas Carol” (1992). Michael Caine stars as Ebenezer Scrooge in this adaptation of the Dickens classic. Kermit the Frog is presented opposite Caine as the perpetually put-upon clerk Bob Cratchit, and the other muppets are cast in roles familiar to viewers of holiday fare.

On Sunday, December 17 from 1-4 p.m., Adams will show the Frank Capra Christmas classic, “It’s a Wonderful Life” (1946) starring Jimmy Stewart, Donna Reed, and Lionel Barrymore. In this post-war classic, a good man learns the value of his devotion and personal sacrifices. Stewart’s character, George Bailey, is saved from his personal despair when an angel named Clarence shows him how his life has changed the world for the better. George Bailey comes to realize that his years of serving the community have made him an integral part of the lives of other people and that “no man is a failure who has friends.”

These film showings and events are a great opportunity to get involved in the life of the library, and to stay involved after December ends, Adams said. For instance, patrons are encouraged to come and search the more than 5,000 films available in the library, and to participate in events such as the Winter Adult Reading Program. Program participants who read at least five books or audiobooks or view a minimum of 10 films will receive a free tote bag and an entry in a prize drawing at the end of winter. Completing additional books and films makes a patron eligible for additional entries in the drawing. Director John Sheridan is planning a special prize for the winter’s end drawing.