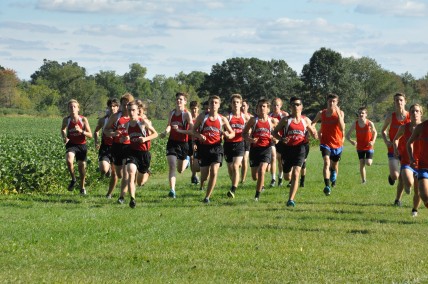 The Bulldogs faced another really tough challenge during a Wolverine Conference Jamboree in Three Rivers at Myer Broadway Park. The park’s hills and an unusually warm day made for slower than normal times for most all the runners.

“It’s not a fast course by any means,” Head Coach Lucas Wolthuis said. “It’s a true cross country course. It’s hilly, it’s competitive. It forces you to not only beat those around you but also beat yourself.”

Both the boys’ and girls’ teams ended up finishing second at the meet. Wolthuis knew there likely wouldn’t be any personal or season records at the meet. This race was more strategic on placing. “I think our kids overall did a good job of worrying less about the course and more about where they were in relation to the other teams,” he added.

At the Wolverine Conference Championship, conditions were much better. The boys finished fifth while the girls finished seventh. Freshman Sam Richardson set a new personal record (PR) for the girls and Ben Welch set a new season record for the boys.

The Bulldogs also did well at the Otsego Bulldog Invite at the end of September. On the girls’ side, Sawyer Barton, Avalee Goodman, Hannah Fenwick, Riley-Ann Bierema and Savina Centofanti all set new PRs. Angel Currie set a new season record.