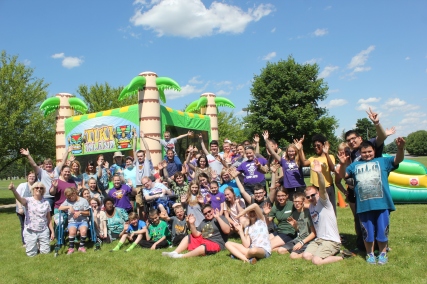 Schoolcraft’s Common Bond participants let out a cheer for the last days of school when they get to have a party each year. 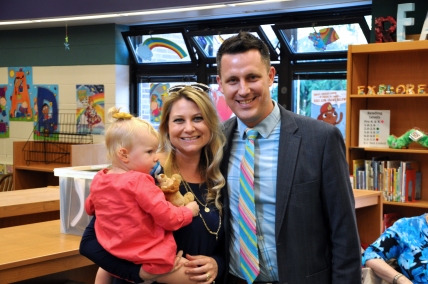 Matthew Dailey with his wife Kristin and daughter Theodora Dailey.

In a 6-1 vote, the Schoolcraft school board approved a proposal that will put a $39.9 million bond issue on the Nov. 5 ballot.

The proceeds would build a new elementary school and additions to the high school to accommodate seventh and eighth graders. The issue was quickly passed by the board without much discussion. Treasurer Kathy Mastenbrook was the lone no vote.

Mastenbrook said “Given the scope of this project … I believe it is prudent to put out a request for proposals for comparative purposes. I am not certain a $39.9 million bond issue is needed to meet the needs of our district.”

The board also approved the hiring of a new social worker and high school principal at the meeting. The social worker, Shelby Getsinger, recently completed her master’s degree training and is a Vicksburg graduate who will now become an Eagle. The board also approved Matthew Dailey to take over as the new high school principal for Ric Seager, who has taken a job as superintendent for Watervliet Public Schools.

Dailey was previously principal at Hazel Park High School in the Detroit area. “He’s full of energy, he’s extremely bright and he really wanted to be an Eagle,” Superintendent Rusty Stitt said while introducing Dailey to the board. He was already present at graduation where he introduced himself to many community and staff members. “It’s been really exciting to be a part of this process,” Dailey said. He used the analogy of a new car to compare the excitement he has for moving to the community.

“Moving to Schoolcraft high school feels like getting the keys to a brand-new vehicle,” Dailey said. “However, that doesn’t mean that you can’t not put gas in it, you can’t not rotate the tires, can’t not do the oil change, that you don’t have to fix the windshield wipers. You’ve got to give it a little love now and then and put a polish and wax on it.

“Just know that by being awarded this position, we’re going to keep doing maintenance on what’s going on and we may put spinners on the wheels every now and then,” Dailey joked. “I appreciate everything you’re doing and I’m looking forward to being part of your community.”