Bike riders stop for a photo before departing on a Quilt Trail ride through the Vicksburg countryside. Photo by Kitch Rinehart. 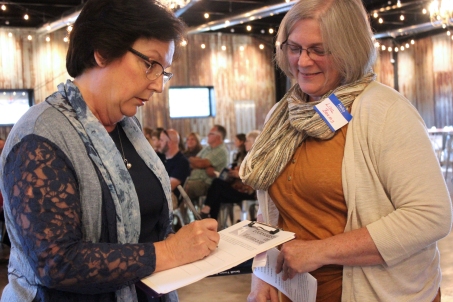 Carol Braymer, first prize winner in the Senior Poem category, signs in at the Tournament of Writers celebration with Lisa Beams on the right.

The outbreak of EEE or Eastern Equine Encephalitis in this area has many people on the alert for protecting themselves from mosquito bites. Recently it hit close to home with Savannah DeHart afflicted with EEE. She would have been a freshman at Vicksburg High School in September and instead is lying in a hospital bed trying to fight off the effects of the disease.

The schools and the Kalamazoo County Health Departments have done the right thing to warn people of the dangers and taking steps to reschedule all the outdoor activities to an earlier hour. It’s an inconvenience but one that we can accept as being for our own good.
A Savannah Strong Facebook page has been set up and her mom, Kerri Dooley, posts regular updates on how her 14-year-old girl is doing. Apparently, there are both good and bad days as she is getting rehab help at Mary Free Bed Hospital in Grand Rapids but doesn’t always feel up to it.

There was an attempted break-in/robbery in one of the homes in Centennial plat on the north side of Vicksburg on Sunday, September 22. One of the suspects was apprehended and taken to the county jail while the other one, a woman, was able to get a ride to downtown Vicksburg. She slipped away from the canine tracking effort mounted by the county sheriff department and the State Police. It is an active investigation of the two suspects who are apparently from Kalamazoo, according to Vicksburg Police Chief Scott Sanderson. Rumor has it that they were armed but Sanderson said that is not the case.
Residents are cautioned to keep their doors locked, especially their garage doors which are easier entry points for potential thievery, according to Sanderson.

The Bike Weekend that was heavily promoted in the Vicksburg area turned out to be highly successful with 110 riders showing up on a beautiful Saturday morning in September. A dinner on Saturday night honored some of the village and city people who helped to make the event possible. An art prize contest on Sunday completed the activities. Thanks to Paul Selden, who worked unceasingly to make it all happen.

Volleyball in Schoolcraft under the tutelage of Coach Erin Onken has been a hugely successful program. One of her graduates, Jayci Suseland, is playing her senior year of college ball at Millersburg University in Pennsylvania. For the second week in a row she was selected as Athlete of the Week in her conference. She is now a four-time Pennsylvania State Athletic Conference’s Southeast Athlete of the Week, having won the award twice as a junior.

Back in Schoolcraft High School volleyball, Andelyn Simkins, the 5-foot-10 senior outside hitter, was named one of 10 finalists for the 2019 Miss Volleyball award. It will be presented at the end of the season by the Michigan Interscholastic Volleyball Coaches Association. The award recognizes the state’s top senior player who also represents the characteristics of scholarship, sportsmanship and citizenship.

A book signing and reading of the authors’ work was held at Vicksburg’s R & R event center to honor Schoolcraft’s Friends of the Library annual Tournament of Writers winners. Although entries are submitted and judged during the winter and early spring, they were congregating this September to do a book signing. The work of the winning authors is published in a beautiful paperback book that is put together by Deb Christiansen and given to each person at this event. It signifies that they have arrived by having their work published in the Small Town Anthology, Volume 5.