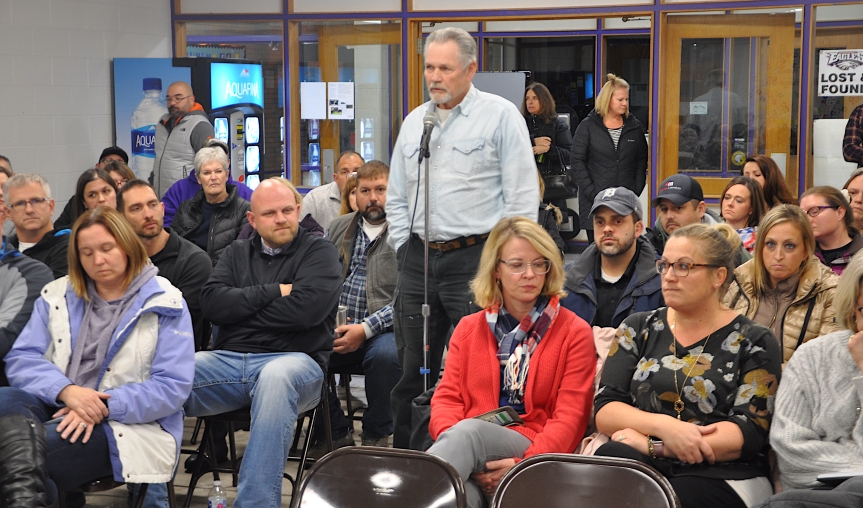 Schoolcraft school district residents had an opportunity to address their Board of Education at its regular November meeting in the aftermath of defeat of a $39.9 million bond proposal. Following the forum, board members placed the proposal before voters in a March 10 election.

Dr. Lloyd Peterson, first to speak, said he liked the plan but voted against the bond because he felt the price tag was too high. “Overall, I would say it was a big bite to begin with,” Peterson said.

He felt a better plan that would have gone over better with the community would have been a $10.5 million, one-mill proposal to move seventh and eighth grade to the high school and fix things like the tennis courts and football stadium. “That would have been a smaller bite and would have alleviated the over-crowding that you say we have.”

He also questioned what the board was referring to when it used the term “modern learning” in its promotional materials. “It sounds like you’re trying to baffle us with BS instead of telling us the truth.”

Several speakers agreed with some of Peterson’s thoughts, especially on the costs. Another speaker suggested taking photos of all the deficiencies to share with the community and show the problem areas.

Kyle Corlett, superintendent of Delton Kellogg Schools and a Schoolcraft resident, spoke first-hand about the challenges of passing a bond. His school passed a $23 million bond last year, so he said he was aware of the work done by the district and board of education in trying to pass the Schoolcraft bond. His family purchased a home in Schoolcraft before he got the job. He said they moved to Schoolcraft specifically for the schools.

“I thought you went about it all the right way and that’s why it’s so disappointing that it didn’t pass,” Corlett said.

Corlett has a kindergarten and second grade student in the district. “I think their teachers do an amazing job considering the facilities that they have,” Corlett said. “They make their rooms look amazing in a crumbling old building.” He thanked the board for its efforts and said he hoped it would try to pass it again.

Adam Haley voted against the proposal because he didn’t like how it shifted the grades around. “I don’t like 11 and 12-year-olds in with 17- to 18-year old high school kids, Haley said. “I know a lot of people say that’s not a big deal, but I look at my 12-year-old daughter, who I absolutely love to death. She’s an incredibly bright young lady. But she wants to be an older kid.”

He said he felt the current setup was already making some of the fifth graders grow up faster than when they were in the older building. “They see those 13-year-olds and they all want to be like them,” Haley said.

Haley said another reason he voted no was because he still has questions on the proposed schedules around lunch periods. He worried that some students will still end up having lunch too early in the morning and it will affect their studies later in the day. “Kids can’t learn when they’re hungry.”

Haley was one of several residents that also spoke on the issue of athletics being included in the bond. These residents didn’t seem to like the idea of so much emphasis of the failed bond being on new athletic facilities and updates over education. A few speakers suggested splitting it off as a separate ballot issue.

The objections to sports were met with emotional responses from some residents. John Pincumbe noted that the current facilities were paid for by the community through various fund raisers. He suggested that could be an option again. “Go out and get the thing built yourselves like we did in the first place,” Pincumbe said. “Do something as a community.”

He said many people may not realize the challenges the athletics programs are facing because the school’s many programs are so successful. “We have failing athletic fields and stadiums,” Ferency said. “We missed probably half our home season on the baseball and softball fields because they were constantly flooded.

Former board of education trustee Skip Fox also defended the place of athletics in Schoolcraft. “Our football team has had the honor of not only winning championships, but also being honored for having the highest grade-point average by the High School Coaches Association which honors football teams with the highest GPA. In 2018, the Eagle football team was awarded First Team All-State for Academic Excellence with a team GPA of 3.91,” he said. “When I was on the board, we looked at athletics as being an extension of the classroom. And I believe that is still the thought of all our teachers.”

He also gave a little history on the construction of the high school, noting the infrastructure was designed for more students and future additions. “It was also built in mind that we could add to the wings and add classrooms which would be the cheapest thing to build,” Fox said.

Several residents spoke about the controversial sewer issue playing a role in the failure of the bond issue. Julie Reisner thanked the board for its efforts, but felt the timing was bad on the vote. “I will say that I don’t think this bond failed because of the work that you did,” Reisner said. “I think there’s more going on in the community and that’s why I believe that it failed.”

She also cited a lack of affordable housing, noting that Schoolcraft homes cost more than Plainwell, Portage and Vicksburg. She said because of the high costs of homes, there are more school of choice children. And the parents of those children can’t vote or pay into the school system.

“I think it’s a community issue,” Reisner said. “And until you get the community making changes, it’s going to be really tough to sway that.”

Other concerns raised at the meeting revolved on what was being done with the old buildings. At least one attendee said he voted no because of confusion dealing with keeping part of the middle school while still building new facilities. Gottschalk clarified that late in the bond process, they decided part of the middle school might be worth keeping for athletics and after-school activity use only.

Some residents suggested they should go to other communities like Mattawan to see what they did to finally pass a bond issue.

At the close of the meeting, Gottschalk asked if there were people willing to volunteer for another bond campaign. There ended up being a lot of raised hands and the board passed around sign-up sheets where people added their contact info.

She also encouraged people to keep reaching out through phone or email on the issue with their thoughts. “I want to hear from you.”