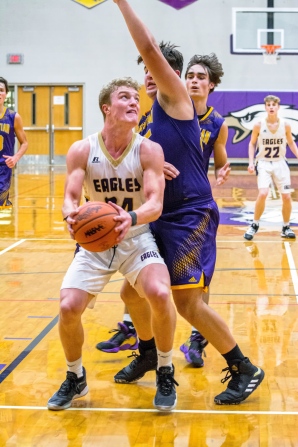 Coach Randy Small and the rest of the Schoolcraft boys’ varsity basketball coaching staff, including Adam Sziede and Caleb Eustice, led the talented Eagles team to the first undefeated conference record since 2013, going 12-0 and 19-0 overall. On February 25, the Eagles made their way south to face off against the Falcons of Constantine. The first meeting in January between these two teams saw the Falcons keep the Eagles to their lowest score of the season, 45-31, only allowing the Eagles 45 points on their home court.

Schoolcraft was not going to allow that to happen again. This time on the Falcons home court, the Eagles topped the Falcons 74-29.  Bryce VanderWeire was the Eagles’ leading scorer with 20. Trevor DeGroote followed VanderWiere with 17 and Kobe Clark had 15. The next team that might stand in the way of an undefeated regular season: the Panthers of Penfield, when they visit the gym at Schoolcraft High on March 3.  If the Eagles are able to hold off the Panthers, it will be their first undefeated regular season since 2010-2011, when the Eagles won the class C state championship, topping McBain 73-59.

In the month of February alone the Eagles have outscored their opponents by 270 points, scoring 554 and only allowing 284. Schoolcraft will be hosting the boys’ basketball district 79 tournament, starting on March 9 at 5:30 p.m. Competing  teams will be Galesburg-Augusta, Kalamazoo Christian, Kalamazoo Hackett Catholic Prep, Marcellus and Schoolcraft.