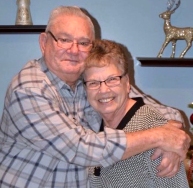 Note: Doug Truckey passed away on March 1 in Vicksburg. However, we did not have a photo available until the family was able to supply this one of Doug and his wife Jan.

Larry Oliver Briggs, 77, Mendon, died April 20 at Bronson Methodist Hospital. He was born in Kalamazoo on Sep. 24, 1942, the son of the late Oliver and Jessie (Evans) Briggs. He graduated from Vicksburg High School and first worked at Tibbots as a welder and then Simpson Paper Company. Larry spent most of his working life at American Axle in Three Rivers. He coached Mendon Rocket Football and Little League Baseball and enjoyed building things in his workshop, especially swing-sets. Larry is survived by his wife, the former Evelyn Sue Hines; sons Kurt (Olga) Briggs of Fishers, Indiana and Kevin Briggs of Mendon; grandchildren Mischa and Allison Briggs and Austin, Connor, Coleton, Ashton, Carter, and Kaylena Briggs; siblings Gene, Connie, Virg, Diana, Ronnie, and Gary; and nieces and nephews. In keeping with his wishes, cremation has been conducted and a memorial service will be held at a later date. Assistance was provided by the Eickhoff Funeral Home of Mendon. Memories and condolences may be shared at eickhofffuneralhome.com.

Thelma Louise (Parsell) Buckham, 90, passed away unexpectedly in her home on April 18. Thelma was born in St. Clair Shores, Mich. on April 15, 1930, the youngest of eight children. On April 30, 1949, she was united in marriage with George Kingsley Buckham and moved to Buckham Farms in Oshtemo, where they worked the farm with their four children and George’s twin brother, Fred. Her gentle and work-worn hands delivered triplet lambs, canned bushels of peaches, kneaded bread dough, sowed seeds, and sewed sheep blankets and party dresses for her granddaughters. She was actively involved in the Oshtemo 4-H Club and Kalamazoo County 4-H for over 70 years. Thelma is survived by her children, Gail (Carl) VanderKolk of Dorr, George (Kathy) Buckham of Schoolcraft, Jeff (Julia) Buckham of Schoolcraft and Brian (Susan) Buckham of Richland; 19 grandchildren; 28 great-grandchildren; 2 great-great-grandchildren; and numerous nieces, nephews and cousins. Private burial has taken place in Genesee Prairie Cemetery. A service to celebrate Thelma’s life will be held later this year. Services are entrusted to Langeland Family Funeral Homes Burial & Cremation Services, Kalamazoo. Visit her page at langelands.com.

Stephen Joel Crane, 82, Battle Creek, formerly of Scotts, passed away April 18. Stephen was born on June 23, 1937 in Detroit and was the only child of Leland and Cecilia (Lenaham) Crane. In his younger years he enjoyed playing baseball. After high school he proudly served his country in the United States Air Force during the Korean War. He worked as a pallet maker for Rock-Tenn in Battle Creek. Stephen was a member of the VFW Post 1527 and the Kalamazoo County Masonic Lodge. On November 10, 2001 he married Norma Jean Olson. Stephen is survived by his daughter, Denise Crane, of Kalamazoo; stepchildren Ronnie (Brenda) Olson of Kalamazoo, Denny (Karen Nay) Olson of Vicksburg, David (Kim) Olson of Vicksburg, Karen (Tom) Dillon of Galesburg, Brenda (Joel) Nelson of Vicksburg and Jack (Dawn Waldron) Olson of Vicksburg; 14 grandchildren and numerous great grandchildren. He was preceded in death by his wife, Norma Jean Crane, in 2012. Stephen is being cremated and will have a military burial of his ashes at Fort Custer National Cemetery once it can be held publicly. Visit his page at mccowensecord.com. Donations may go to Talons Out Honor Flight talonsouthonorflight.org/donate.html.

Helen I. Meeuwse, 88, Vicksburg, died April 8. Helen was born February 24, 1932 in Kalamazoo to Edward and Edna (Miles) Stacey. On February 19, 1949, she married Engbert Meeuwse. Helen worked for the Gibson Guitar Company for 17 years. She was an avid reader and enjoyed gardening and weeding. Helen is survived by her children, Kay (George) Kucinich, Brenda (Mike) Hills and Jerry (Karla Derington) Meeuwse; grandchildren Melissa McGuire, Anne (Paul) Bowgett, Duane (Emily) Kucinich and Miles Meeuwse; two great-grandchildren and many nieces and nephews. Helen was preceded in death by her husband, Engbert, brothers Charles, Loyal, Ralph, Miles and Arnold Stacey and sisters Elizabeth Harden, Meda Ruse and Loraine Martin. Due to the COVID-19 virus, a service will be held later when it is safe for Helen’s family and friends to be together and celebrate Helen’s life. Donations may go to Hospice Care of Southwest Michigan. Visit her page at farleyestesdowdle.com.

Stuart Renwick Molineaux, 84, Battle Creek, passed away peacefully in his sleep April 12 at Care Community. He was born on August 23, 1935, the only son of Grace and Forrest Molineaux of Vicksburg. He is survived by sisters Sharon Rutz of Marcellus; Debbie Molineaux and Sue Molineaux, both of Green Valley, Ariz.; Jeanne Molineaux, Penn Valley, Calif.; nephews Casey Hulse of Vicksburg, Steve Rutz of Silver Springs Md., Chris Rutz of St. Joseph, Bryan Graybill of Gladwin, Mich; and many cousins. Stuart was predeceased by his oldest sister, Pam Hulse. Stuart was raised in Crystal, MI. He was a marine and then practiced law. Stuart was physically assaulted in the mid-1990’s with resulting brain damage and moved to supported living. Visit Stuart’s page at avinkcremation.com.

Diane Kay Reece, 80, Kalamazoo, died April 27 at Friendship Village. She was born on Sept. 4, 1939 and raised on the family farm in Fulton, the daughter of Forrest and Ruth (Harrison) Snyder. Diane graduated from VHS in 1958. On June 21, 1959, she married Ron Reece, whom she had known since kindergarten. He preceded her in death on October 18, 2006. Diane is survived by her three children, Jeff (Katie) Reece of Ann Arbor, Tammy Patterson of Portage, and Jenny (Bryan) Taffee of Portage; grandchildren Morgan (Ryan) Szumski of Kalamazoo, Mackenzie (Nam) Le of Portage, and Mallory (Greg) Waddell of Kalamazoo, Jordan Taffee of Portage, and Carson Taffee of Portage; great grandchildren Carter and Collins Szumski, and Indie Le; sisters Joyce Francisco of East Naples, Florida, and Vera (Chuck) Walker of Portage; brothers-in-law Gordon Mitchell of Fulton, Richard Portinga of Portage, Tom (Sandy) Reece of Chicago, John (Lori) Reece of Ann Arbor, and Dave (Kathy) Reece of Portage; sister-in-law Janet Reece of Chicago; and many nieces and nephews. In addition to her husband and parents, Diane was preceded in death by her father- and mother-in-law, Paul and Beulah Reece; brothers and sisters-in-law, Richard and Iva Snyder, Stewart and Maxine Snyder, Leslie and Rowene Snyder; brother Lee Snyder; sister Mildred (nee Snyder) Mitchell; sisters and brothers-in-law Alice (nee Snyder) and Dana Fry, Peggy (nee Snyder) Hollenbeck-Portinga and Gary Hollenbeck; and brothers-in-law, Sam Francisco and Jack Reece. Donations may go to Hospice Care of Southwest Michigan or Bok Tower Gardens. Visit her page at hohnerfh.com/diane-reece/.

John Franklin Sturgeon, 87, Vicksburg, passed away April 8 at his home. John was born December 23, 1932 in Flint, the son of Jonathan Martin and Ida Mae (Goode) Sturgeon. He graduated from Dye High School in the class of 1953, attended Owosso College and proudly served in the Michigan National Guard. John was an active member of both Owosso and Vicksburg Nazarene churches where he sang bass in the church choirs for the past 40 years, along with serving on calling teams and the church board. He married Shirley Mae Shoup in Owosso on February 13, 1970. John retired from General Motors after 42 years of service. John is survived by his wife; children Mark (Sherri) Sturgeon of Mattawan, Paul Sturgeon of Henderson, Nev., Karen Lewkowski of Lakeland, Fla., David (Sue) Stanton of Sturgis, Johnna Sturgeon (Kevin Maves) of Vicksburg, Joanna Sturgeon (T.J. Sibert) of Vicksburg; 11 grandchildren and 11 great-grandchildren; other loving family members and friends. He was predeceased by his parents and brothers Albert and Martin Sturgeon. A private family graveside service will be held at Hillcrest Memorial Gardens and a public celebration will be held at a later date. Donations may go to Nazarene Compassionate Ministries. Online condolences may be sent to the family at Nelson-House.com.

Julius William Weessies, Jr. “Bill”, 80, passed away April 16. He was born June 16, 1939 in Dayton, Ohio, the son of Julius and Irene (Frakes) Weessies, Sr. Bill grew up in Vicksburg and graduated from Vicksburg High School. He served in the U.S. Air Force, returned to the Kalamazoo area and resumed working as a technician for Western Electric and its successor companies, retiring in 1994. Bill was a longtime fan and supporter of WMU Hockey and enjoyed cruising, powerboating and auto racing. On March 11, 1961, Bill married the former Judith A. Ryder who preceded him in death on February 20, 1994. He was also preceded in death by his parents. Bill is survived by his son, Greg Weessies of Schoolcraft; his companion, Carolyn Kirkpatrick of Portage; brothers Jim and Bob Weessies; several nieces and nephews; and many close friends. Private graveside services will be held in the Schoolcraft Village Cemetery. Donations may go to Bickford of Portage Assisted Living & Memory Care. Visit his page at langelands.com.