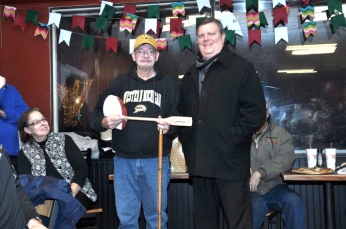 Bob Smith, an avid Western Michigan University football fan from Vicksburg who has had some serious medical problems recently, received a P.J. Fleck autographed football and a signed boat oar in appreciation of his years of owning season tickets through thick and thin.

Robin Hook, the voice of WMU football and assistant athletic director, presented Smith with the memorabilia at a pizza party in Smith’s honor at Jaspare’s in late December. The surprise gathering brought over 60 of Smith’s friends and neighbors to honor him and join in the occasion.

Stella Shearer, the president of the Vicksburg Farmers’ Market, arranged to surprise Bob by scheduling a board meeting at Jaspare’s. “Bob’s first reaction was the realization that he was not at Jaspare’s to attend a VFM board meeting asking, ‘What’s going on?’ as he saw all the people inside and the party atmosphere.

Shearer explained to Smith that when people found out he was ill many began to ask, “What can we do for Bob?” Knowing he was a huge Bronco fan, Shearer contacted Kathy Beauregard and P.J. Fleck to ask if there was anything they could do. Kathy responded immediately and set the wheels in motion. Bob’s reaction to this was a quiet whisper of “Wow. No way!”

The football displayed the Bronco logo and “Row the Boat” and was signed by P.J. Fleck. The 30-inch wood oar also had the “RTB” reference and PJ’s signature. Before the gift presentation, Hook gave a summary of this year’s very special season. Hook noted the huge impact the season has had not only on the university, but the larger community and beyond. Robin thanked the Vicksburg community, knowing there is a big Bronco fan base here. Robin wished Bob well and extended sincere thanks and appreciation for his strong loyalty to the Bronco program over the past 15 years. Just before Robin and his wife, Ruth left, Rudy Callen led the room in a loud cheer of “Row the Boat.”

Smith, originally from Comstock, is a Marine Corps veteran of 20 years. Upon a medical retirement from Color Craft in Kalamazoo, he settled in Vicksburg and planted a pumpkin patch at his home on East V Avenue. He also started making maple syrup and sold the products at the Vicksburg Farmers’ Market since its inception eight years ago. He serves on the market board. Four years ago he volunteered to sell advertising when the South County News was just a startup newspaper. He and his wife, Kathy, and son, Brandon, have been volunteers at Indian Lake Elementary for many years. The principal, Ruth Hook, praised the Smiths for their work at the school even as Brandon moved on to the Vicksburg Middle School.