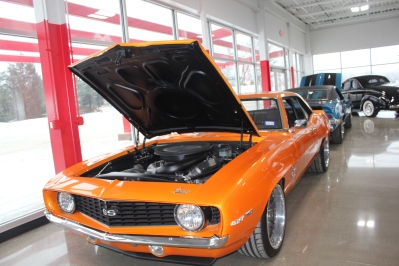 A DutchBoys hotrod is shown as it sits with the hood open in their new showroom at 820 W. Prairie Street in Vicksburg.

Another DutchBoys restoration on view in their new showroom.

The name DutchBoys doesn’t come close to describing what this new business in Vicksburg sells. Add the words body work, paint, muscle car restorations, pro-touring, street rods, engine bay detailing and it’s possible to get the flavor of what they are producing.

DutchBoys Hotrods, the father-son team of Joe and Paul Van Nus, moved into the old Eimo manufacturing building on W. Prairie in May and June of 2018. Jamie Clark of Clark Logic had purchased it earlier from Eimo after that company built a new plant next door in the Leja Industrial Park. Clark Logic utilized the building for storage at first until the DutchBoys looked for space to move out of a garage in Comstock, although Joe VanNus was from Vicksburg and son Paul was living in Schoolcraft.

“We have quadrupled our space with this move,” said Paul VanNus. “It’s been a huge time saver as I spent too much of my day just moving cars around to get to where we could work on them. Jamie Clark has gone above and beyond for us. He has given us this opportunity to succeed. Not just us, but lots of other people too.”

Besides leasing the space to the DutchBoys, Clark extended the footprint of the building with a huge glassed-in showroom that displays the beautiful finished cars that have already been purchased. Most of the DutchBoys business comes not from retail., but from wealthy people who can afford the cost of a renovation job that could run between $100,000 to $250,000.

Their work is strictly hourly, with time and materials included. “The sky is the limit for some people but If someone has a budget in mind we can build a car around it. We can make an old car ride and handle like a new car with all of the amenities,” VanNus explained. “For instance, Clark’s dad’s car sits in the forefront of our new showroom with hot rod flames painted on the engine encasement. It was one of his favorite cars but not reliable. We will put a fuel injection motor in so it will run like a charm.”

They have done restorations for Dan DeVos, who is a car collector out of Grand Rapids. Another car in the showroom is owned by Brian Thure of Taylor Farms in Tennessee. “We are making some new modifications to fit his personal needs,” VanNus explained.

VanNus gets most of his business through word of mouth. He travels to shows all over the country, trailering his specialty cars to Tennessee, North Carolina, Delaware, Pennsylvania and Texas. At car shows he gets lots of newspaper coverage along with social media. The cars are a work of art, say the people who interview him.

It didn’t start out quite this way. Paul and his wife Tori, are 2009 graduates of Vicksburg High School. His dad Joe worked in the collision industry painting cars and is very good at what he turns out, according to his son. He was with Dunshee for many years. Paul knew in high school that he wanted to work on cars. “I found my niche, first as a hobby and then as a job,” he explained. His dad worked with him in the garage in Comstock as the paint guy, which he loves to do. They had one other employee. With their move here, they now have nine and counting.

Paint and body work is 70 percent of their business. The move represents a tremendous investment for a growing business. “It cost $25,000 just to move the paint booth,” he said. Paul pays attention to the front office payroll and overhead along with his wife, Tori, who is an accountant. They have lots of money invested in parts that get shipped from all over the country. “We’ve created a monster,” Paul exclaimed. “It takes a lot of money to make money. Thankfully, we are riding the waves of success. Not bad for a couple of DutchBoys.”