Chris Moore and Raj Singh are all smiles as they accept their individual awards as Entrepreneur of the Year in the Pacific Northwest region of Ernst & Young’s recognition gala in Seattle. 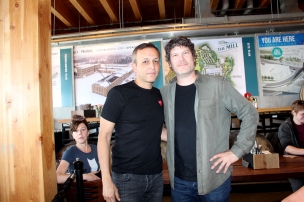 Raj Singh and Chris Moore meet for an interview two days after receiving awards at Old Stove Brewery in the Pike Place Market in Seattle.

Raj Singh and Chris Moore are pictured with Vuong Loc who also lives in Seattle, attended the gala, and grew up a few miles from Singh near Austin Lake. Loc attended Vicksburg schools.

Standing tall on a stage in Seattle among a field of over-achievers in mid-June were a couple of hometown guys, Rajeev (Raj) Singh and Chris Moore. Each had migrated from Vicksburg to Seattle as young upstarts in the field of technology in the 1990s. They weren’t captains of industry then, just guys with a dream to succeed in the highly competitive world of tech-based Seattle.

Twenty-five years later, here they were together at the apex of their separate careers, singled out as movers and shakers in the Northwest region. The event was sponsored by Ernst & Young, the accounting firm that initiated the Entrepreneur of the Year program throughout the United States and worldwide in 1986. They had been selected by an independent panel of judges and presented with their individual awards during a black-tie gala in Seattle.

The Entrepreneur of the Year awards program, founded by the accounting firm, is the world’s most prestigious business awards program for entrepreneurs. The program encourages entrepreneurial activity among those with potential and recognizes people who inspire others with their vision, leadership and achievement.

Moore was acclaimed as Mold Breaker of the Year and Singh as Innovator of the Year out of the 22 nominees and were brought on stage as winners. They will proceed to the next level of competition for National Entrepreneur of the Year for the United States in Palm Springs, Calif., in November. Each of their technology companies is serving the health care industry although their earlier endeavors did not.

Singh and Moore Grow Up in Kalamazoo County

Singh’s family emigrated from India and settled on the north shore of Gourdneck Lake in 1980 when his engineer father, Gopal Singh, went to work for Eaton Corporation in Galesburg. Raj Singh, now 51, attended Portage Middle School and Portage Central. Moore’s family goes back to settlers who came to Vicksburg and Schoolcraft in the 1830s. Now 54, he attended Vicksburg schools.

Moore was instilled with the entrepreneurial spirit from an early age. Singh admits to just wanting to get an education so he could find a good job. Both said they wanted to meet expectations of fathers who wanted them to excel. Moore attended the University of Michigan studying liberal arts, although he preferred spending time on his business, Moore Audio, making loudspeakers.

Singh attended General Motors Institute in Flint for two years. He didn’t much like it and came back to graduate from Western Michigan University with a degree in engineering, then started his first job with Ford Motor Company.

Both men struggled to make ends meet for a few years. Singh left Ford and was admitted to law school at Notre Dame. He was living in Detroit with five to six months off before school started when he got a life-altering call from his older brother, Steve. “Come to San Francisco to write code. You can have my car, but no salary.” Once there, Singh met and worked with Mike Hilton to develop an idea that would later result in a start-up company they named Concur Technologies.

Singh and Hilton moved to Seattle because the cost of living was cheaper than in San Francisco, where Singh’s brother worked for the software company, Symantec. They worked out of an apartment in Seattle where the shared rent was $450 a month, burning through Raj’s $2,500 savings in seven months. Within four years, Concur was going public (probably too soon, Singh admits) with an IPO when they had annual revenue of $25 million and losses of $75 million.

But in 2014, Concur was purchased by SAP, a German multinational software company, for $8.3 billion. Singh stepped back with some time to reflect on his next step. In 2015 he accepted the CEO position with another startup company called Accolade. Hilton serves as chief product officer. The company helps employers help their workers navigate healthcare options.

“Entrepreneurship is in the fabric of this region, and you can feel its energy within the people and the work we’re doing at Accolade. We’re heads down trying to change healthcare in this country – it’s a lofty goal but healthcare is too complex, costly and doesn’t get the outcomes we all deserve. We appreciate opportunities to elevate our mission across the country and share the entrepreneurial spirit that thrives at Accolade,” Singh said as he accepted his award.

About the time Singh moved to Seattle, Moore also migrated west to Seattle where he founded Concord Technologies in 1996. Concord served as an online hosted service provider for the popular WinFax Pro fax software, but by 1999, the company had created and delivered the SAAS industry standards for internet fax and unified messaging operating through the world’s most prolific fax software. With Concord firmly established as the leading provider of online fax solutions for health care, in 2018 Moore extended the “Cloud Fax” platform with a new set of easy-to-use cloud software services the company branded as “NEXTSTEP.” This new service enables Concord to go beyond delivering faxed patient records electronically by allowing customers to digitally incorporate those documents into clinical workflows and ultimately, to become usable parts of an electronic patient record.

“The award couldn’t have gone to a more deserving person.  Not only does Chris have the vision, but an incredible endurance to see those dreams become a reality, no matter how long or difficult the journey.  And he has a lot of dreams! it’s inspiring to be around,” said Dan Tierney, one of the original Concord employees in Seattle.

Old Stove Brewery and The Mill at Vicksburg

In 2013 the opportunity of a lifetime for someone who likes to drink beer dropped into Moore’s lap. Pike Place Market in Seattle was seeking proposals for a new phase of the historic old market in downtown Seattle. He submitted a proposal that caught the eyes of the reviewers and soon he was knee deep in architects and brewing equipment. Old Stove Brewing (named after an old Kalamazoo stove) won the bidding and opened in the spring of 2017. It has been going strong with great beer, good food and beautiful vistas looking out on Puget Sound.

Moore’s most recent venture and major investment is preserving The Mill at Vicksburg—a historic paper mill he’s transforming into a mixed-use campus that will include meeting and convention space, multiple indoor and outdoor concert venues, an Old Stove Brewery and Taproom, residential, commercial and outdoor recreation space, and a boutique hotel while also stimulating long-term economic revitalization in his hometown of Vicksburg.

At the June 14 event Moore thanked his parents who “always supported my entrepreneurial risks and encouraged me to take more.” He also acknowledged that the award helps recognize a childhood dream of becoming an entrepreneur: “Ever since I was a little kid I always wanted to be an entrepreneur and I’ve been able to live my life that way. I’m very appreciative of this recognition of how my life has unfolded.”