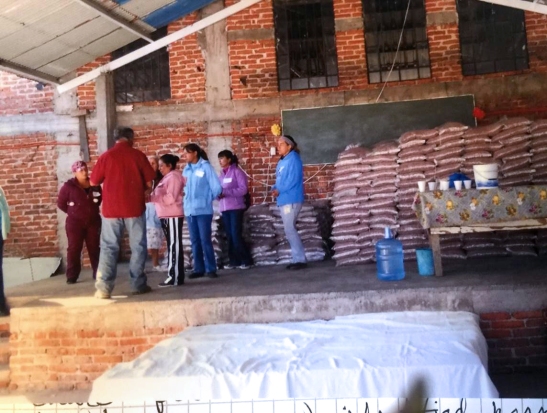 People line up to help unload Blodgett’s contributions to Mission to the Poor.

Andy Blodgett in his office before he passed away.

Note: This is Part 2 of this article; Part 1 of this story ran in the March issue of the South County News. Both parts were written in November 2017.

Three (sometimes four) times a year, Andy Blodgett and his wife, Alicia, made the 2,378-mile drive back from Michoacán, Mexico, having delivered gifts, merchandise, money and food to the poor people in this remote southern region of Mexico.

For 20 years, Blodgett’s Mission to the Poor helped “the poorest of the poor” and distributed to the Purepechas Indians who live 3/4 of the way up a 10,000-ft mountain. The roads are so desolate and rarely traveled in the area that going only seven miles can take 45 minutes. But there are also issues with the Mexican Mafia up in those regions, so the Blodgetts put themselves in considerable danger for Americans with the risk of carjackings and kidnappings.

They weren’t able to distribute their gifts in the mountains due to the very real danger of the Mafia. When they distributed items in Zamora, a Mexican woman who sold fabric to the local women was kidnapped. Her family paid the ransom, but the woman was later found dead anyway because she had recognized one of the kidnappers as her cousin.

Did he worry about his safety? “It’s either faith or fear. It can’t be both. I am not afraid. But the absence of fear is not bravery, because I’m not brave either,” according to Blodgett. “I do tell my family not to pay the ransom if I am kidnapped. Find the people who did the kidnapping. Oftentimes a family ends up with a dead body anyway, even if they pay the ransom.”

Blodgett had some scary encounters with police in Mexico, nearly losing his van to the Federal Police of Mexico for a bogus speeding ticket. They searched his van and found what they called “contraband” or excessive goods they considered smuggled into Mexico. “We’ve had to pay bribes, many, many times. But when in Rome, do as the Romans,” Blodgett said.

The police took him to an ATM where he twice had to withdraw large sums in Mexican pesos. “The guy also took every cent I had on me. He gave me my papers to move on and asked me where I was going. Then he realized I would need gas to get there, and he must have felt a little guilty, because he gave me enough gas money to get there,” Blodgett said. The episode cost him $1,742 in just what he withdrew from the ATM. “It’s just the cost of doing business in Mexico,” Blodgett said.

When they crossed the border into Mexico, sometimes they were instructed to completely unload the entire van. They would typically decline and just return back into the US, to try again later. This happened at least four times. They were almost strip-searched coming back into the US from Mexico. Their van was routinely inspected, with customs-agents looking for drugs. Blodgett once brought white cane sugar back for his daughter which an excited customs-agent mistook for a large amount of cocaine.

Blodgett was inspiringly humble about his life’s mission. “I don’t take credit for this thing. There are a lot of people involved with this project. It’s many other people who made it all work,” he said.

With The Mission to the Poor, 100 percent of what was donated went directly to the poor. Volunteers, mostly the Blodgetts, handled all the administration and “every penny” went into the Mission.

In addition to the danger of the Mexican Mafia and corrupt police, the Blodgetts weathered pastors moving and priests relocating, forcing changes for The Mission to the Poor. What kept him going? “When God shuts a window, he opens a door,” he said, smiling. Blodgett, it seems, opened many doors for others.

Editor’s Note: Andy didn’t stop making trips to Mexico just because he had terminal cancer; the last trip in December 2019 took Andy’s last bit of energy and landed him in the hospital days later.